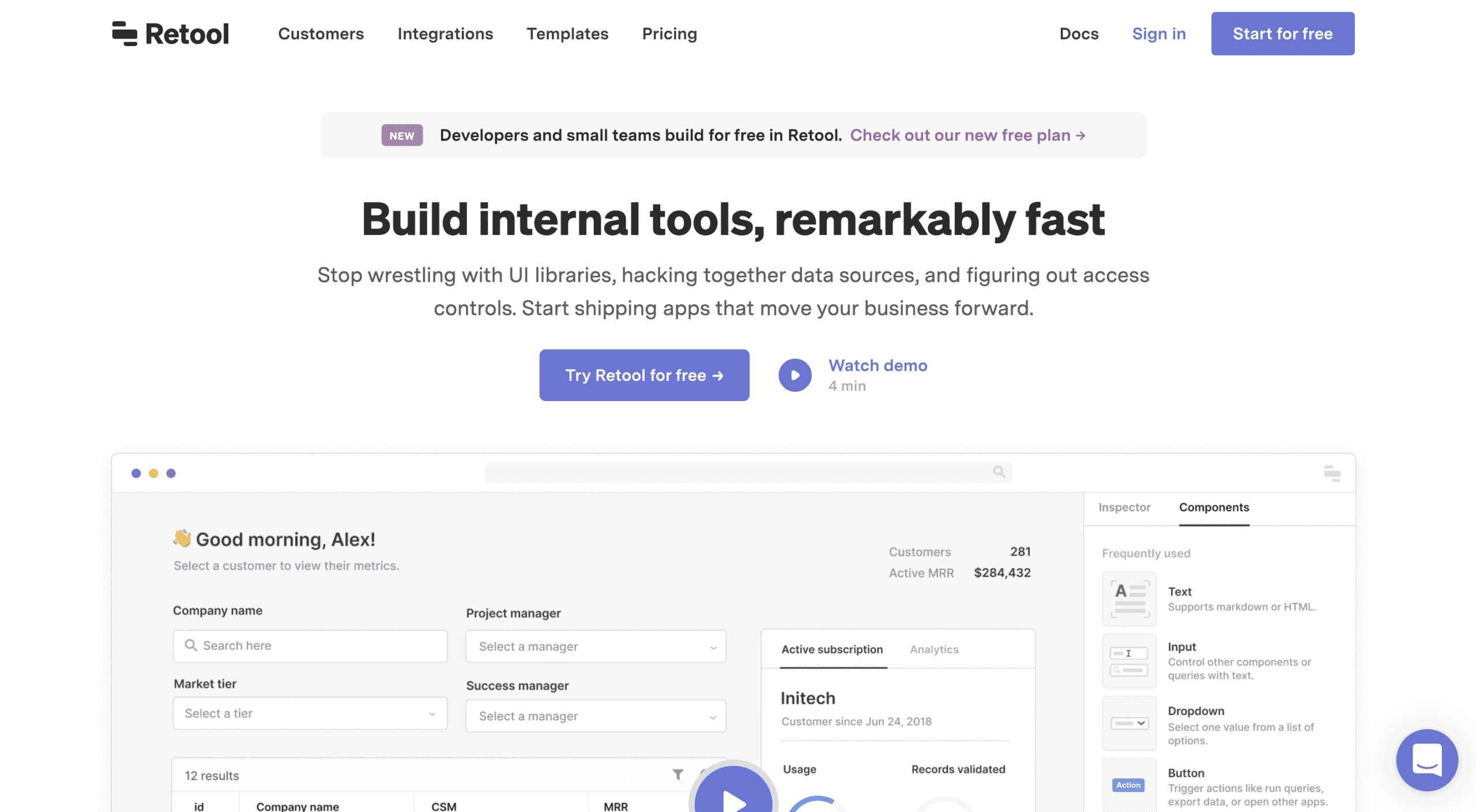 Spend your time getting UI in front of stakeholders, not hunting down the best React table library. Assemble your app in 30 seconds by dragging and dropping from our pre-built components.

Connect to anything :
Connect to most databases or anything with a REST, GraphQL or gRPC API. Retool empowers you to work with all of your data sources seamlessly in one app.

Your data is always stored by you. When a query is run, the Retool backend proxies the request to your backend. We don't store any of the data. No more ETL-ing data around!

Read or write data with queries :
No need to worry about storing isFetching in Redux or handling errors from your backend. Retool manages all the hard stuff. Read in data from MongoDB, join it to Postgres with SQL, and POST the result to Stripe's API.

You only write the things that are custom to your app, like the SQL queries, POST requests, or data transformers.

Built for developers :
Retool is highly hackable, so you’re never limited by what's available out of the box. If you can write it with JavaScript and an API, you can build it in Retool.

You can write JavaScript almost anywhere inside of Retool. Just wrap an expression with double brackets like{{ Math.max(select1.value, 10) }} and it’ll execute as sandboxed JS. Using Transformers, you can write larger, reusable blocks of code for manipulating data. There’s also a native API for directly interacting with components and queries via JS.

Deploy and share securely :
Retool comes with the security, reliability, and permissioning built in.

Host on-premise :
You can host Retool on-premises, behind your own VPN, and in your own VPC. Deploy via Docker or Kubernetes.

Revision history via Git :
Sync Retool apps to a Git repository, so you can manage Retool apps as code. Oh, and choose what version is deployed in a nice GUI.

Fine-grained access controls & audit logs :
Granularly control what users can access which apps and which resources. And after they use the apps, query what they did via the audit logs. (Which you can then build Retool apps atop of.)

SAML SSO and 2FA :
Sign in with the services you already use, including Google, Okta, Active Directory Federation Services, and other SAML-based identity providers. Import groups and use them inside of Retool.

We offer solutions for enterprise search, observability, and security that are built on a single, flexible technology stack that can be deployed anywhere.